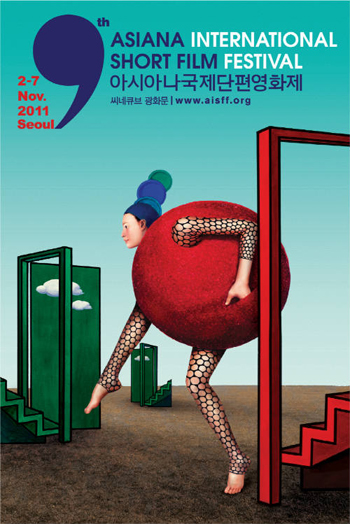 The 9th Asiana International Short Film Festival closed Monday, Nov. 7 after a six-day run with Jero YUN’s fiction short <Promise> winning the best film award.
At the Closing ceremony, Festival Director AHN Sung-ki and jury head KANG Soo-yeon, both veteran Korean actors, were joined by jury members director INUDO Isshin from Japan, director KIM Tae-yong from Korea, Sarah Hoch DELONG, founder and Executive Director of the Guanajuato International Film Festival, and Tono Seigo, Festival Director of the Short Shorts Film Festival & Asia.
“This year, 54 films from 35 countries were in the official selection out of the 2,173 submissions from a total of 90 countries this year, the most countries ever,” said Ahn.
He went on to say that with the competition and special programs, a total of 95 films from 36 countries were screened over the six days of the festival. AISFF took in about 4,000 admissions of paying and invited viewers.
Special programs included “Focus on Directors: Cinema Old & New” which featured films such as <I Am a Truck>, a 1953 short film by Korean master KIM Ki-young (<The Housemaid>) and Robert Zemeckis’ 1972 short film <The Lift>.
"The Travelling Shorts in Japan" section, and exchange program with the Short Shorts Film Festival & Asia and “Travelling Shorts in Korea” section were both all sold out.
Jury head Kang Soo-yeon noted, “This year, there were especially a lot of themes dealing with human rights. They expressed well the love and relationships between family, the extreme loneliness of society’s youth in this era.”
Because of the quality of the films in competition, she said that the Best International Short Film Award went ex-aequo to <Blue Rinse>, directed by Matt LEIGH, and <The Factory>, directed by Aly MURITIBA.
AISFF’s Grand Prize of KW15 million (US$13,400), a trophy and two roundtrip flight tickets went to Jero Yun’s <Promise>. The jury rated the film, which takes the form of a documentary with narration, for its strong drama and natural storytelling, as well as the directing which maintained an emotional throughline to the end.
“All of the jury members are waiting for director Jero Yun’s next film, and hope that this film will be screened to more people,” declared Kang.
For more information, visit this page: http://www.koreanfilm.or.kr/eng/coProduction/festivalView.jsp?seq=13.
Nov. 8, 2011
Any copying, republication or redistribution of KOFIC's content is prohibited without prior consent of KOFIC.
Related People