THE SHAMAN SORCERESS and SURA Awarded in Annecy 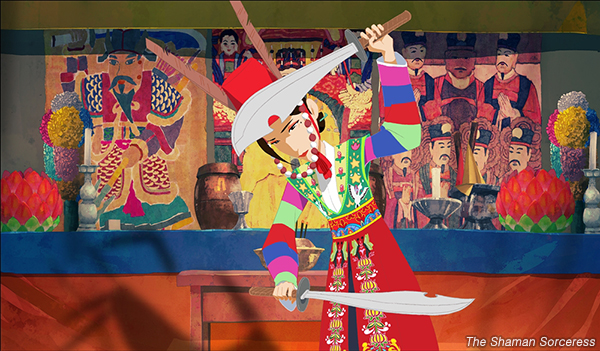 A pair of Korean films have received jury distinctions at the Annecy International Animation Film Festival, the most prestigious event for animated films around the world. AHN Jae-huun’s The Shaman Sorceress (2018) was awarded in the Contrechamp competition section, while JEONG Hae-ji’s Sura was recognized in the Graduation Short Films competitive program.
The Shaman Sorceress debuted at the Busan International Film Festival in 2018 and follows the story, adapted from a novel of the same name, of a shaman who lives with her mute daughter. One day her son returns to the family stead after having converted to Christianity. This plunges the family into a conflict over their clashing faiths. The film is the latest from acclaimed animation filmmaker AHN Jae-huun, who participated in Annecy in the main competition with his work Green Days in 2011.
JEONG Hae-ji’s Sura, a project from the Korean National University of Arts (K’Arts), follows a high school student and her pregnant friend. The jury awarded the film “for taking on an incandescent subject and making it poetic, personal, subtle and complex.”
A total of six Korean films screened in Annecy this year. CHO Kyung-hun’s Beauty Water also screened in the Contrechamp section, PARK Jee-youn’s Ghosts was in the ‘Short Film Competition’, Nausea by HAN Subien also screened in ‘Graduation Short Films in Competition’ and finally MIN Sung-ah’s Boriya (2019) was featured in ‘Young Audiences Short Films in Competition’.
The Shaman Sorceress and Sura join a long line of successful Korean films at Annecy. Among them, the Crystal for a Feature Film, the top prize at Annecy, has gone to two Korean films in the past: LEE Sung-gang’s My Beautiful Girl, Mari in 2002 and 2004’s Oseam (2003) by SUNG Baek-yeop.
Any copying, republication or redistribution of KOFIC's content is prohibited without prior consent of KOFIC.
Related People Related Films Related Company