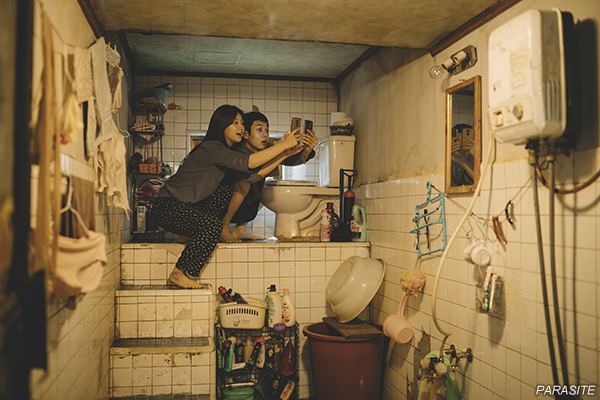 BONG Joon-ho
’s latest film PARASITE continues to make history as the Palme d’Or-winning film finds itself right in the thick of the end-of-year awards race in North America. The Golden Globes, a major award body often considered a litmus test for the Academy Awards that cap the season, revealed their 2019 nominations this week, with PARASITE landing in three major categories: Best Director, Best Screenplay and Best Foreign Language Film. This marks the first time a Korean film has been nominated at the Golden Globes.
With its Cannes triumph and as one of the most critically acclaimed films of the year, not to mention being the top-selling foreign title of the year in North America with USD19.35 million as of this writing, PARASITE is considered a front-runner in the foreign language categories of all the major awards groups. It was thus no surprise to see it land yet another nomination for that category at the Golden Globes. BONG’s film, which will compete alongside Portrait of a Lady on Fire, Pain and Glory, The Farewell and Les Misérables, has already picked up nine Best Foreign Film accolades during this awards season.
PARASITE also found itself nominated for Best Screenplay and Best Director, announcing itself as a major contender for some of the biggest prizes Hollywood has to offer. In the screenplay category BONG and his co-writer HAN Jin-won will be going up against Marriage Story, The Irishman, Once Upon a Time in Hollywood and The Two Popes. BONG’s competition for the Best Director prize includes Martin SCORSESE (The Irishman), Quentin TARANTINO (Once Upon a Time in Hollywood), Todd PHILLIPS (Joker) and Sam MENDES (1917).
The 77th Golden Globe Awards will be aired live during a show hosted by Ricky GERVAIS at the Beverly Hilton Hotel on January 5th.
Any copying, republication or redistribution of KOFIC's content is prohibited without prior consent of KOFIC.
Related People Related Films Related News