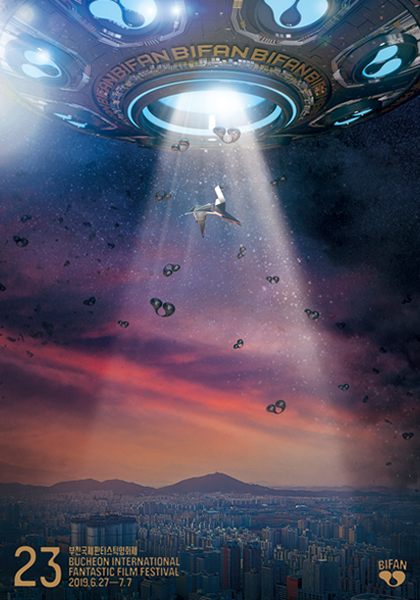 The Bucheon International Fantastic Film Festival (BIFAN - Festival Director SHIN Chul) kicked off its 23rd edition last Thursday, June 27 with a lavish ceremony at the Bucheon Gymnasium. Prior to the show, which was hosted by actors KIM Da-hyun and YOO Da-in, several A-list stars graced the red carpet on the eve of Asia’s top genre film event.
Among the high-profile guests in attendance were local stars KIM Hye-soo (Default, 2018), the subject of a career retrospective this year at the festival, and UHM Jeong-hwa (Princess Aurora, 2005), a member of this year’s Bucheon Choice Competition jury. UHM’s fellow jurors include Japanese director KANEKO Shusuke, local filmmaker E.oni and journalist Jonathan BARKAN. Other notable figures in attendance included directors LEE Chang-dong and IM Kwon-taek, and Korean Film Council (KOFIC) chairperson OH Seok geun.
A Blade Runner-inspired laser dance show kicked off the ceremony, which was followed by opening remarks from JUNG Woo-sung (Steel Rain, 2017), who was the subject of last year’s career retrospective. BIFAN Chairperson CHUNG Ji-young welcomed guests, saying, “I urge you to enjoy the taste and beauty of BIFAN, which has renewed itself for its 23rd edition.”
Honorary chairperson JANG Deog-cheon, the mayor of Bucheon City, then took to the stage, remarking that “BIFAN was officially designated by the Cannes Film Festival as one of the top seven genre film festivals in the world….Together with BIFAN, I will help to make Bucheon a city that promotes the appeal of genre films.” New festival director SHIN Chul commented that “Instead of being a film festival that looks back on the past 100 years, BIFAN will become a festival that prepares for the next 100 years of Korean cinema.”
Following several more remarks made by KIM Hye-soo and UHM Jeong-hwa, the audience was introduced to director Edgar NITO and the cast of his film The Gasoline Thieves, which served as the opening film of this year’s festival.
The 23rd BIFAN will have its closing ceremony on Friday, July 5, followed by two more days of encore screenings.
Any copying, republication or redistribution of KOFIC's content is prohibited without prior consent of KOFIC.
Related People Related Films Related Company Related News