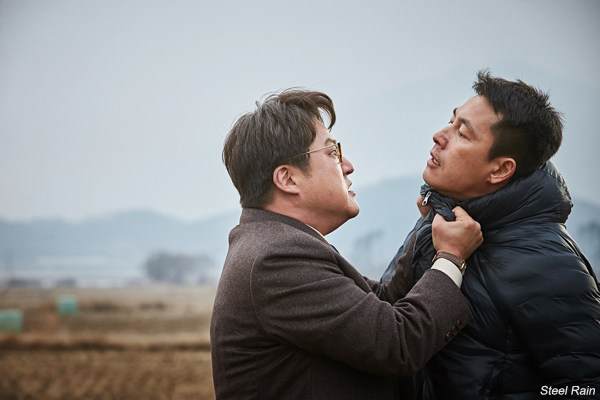 Stars JUNG Woo-sung and KWAK Do-won are considering reuniting with director YANG Woo-suk on a sequel to their North Korea-themed espionage action-drama hit Steel Rain (2017). According to JUNG’s agency Artist Company, the star is positively considering the casting offer for the project, which is known as Steel Rain 2: Summit (translated title).
Based on the webtoon of the same name by Director YANG, the original Steel Rain drew over 4.5 million viewers during the busy end-of-year season in 2017. JUNG played a rogue North Korean secret agent who teams up with a South Korean intelligence officer to prevent a nuclear Armageddon.
Steel Rain 2 will once again focus on an intense geopolitical struggle, this time focusing on the theme of reunification and drawing inspiration from the recent talks that have occurred between South Korea, North Korean and the United States, hence the ‘Summit’ of the title.
JUNG last appeared in the hit legal drama Innocent Witness while his next film Beasts Clawing at Straws, opposite JEON Do-yeon, is currently awaiting release. THE WAILING (2016) star KWAK hasn’t been seen on the big screen since Steel Rain but has several projects on the way, including WOO Min-ho’s political thriller The Man Standing Next and the action-comedy The Golden Holiday.
Director YANG, who first made his name as a webtoon writer, broke out as a filmmaker with his debut The Attorney with SONG Kang-ho. Released in 2013, the film was a significant hit, drawing over 11 million viewers.
Once casting has been completed, which includes a search for someone to play the role of US president, production is expected to get underway in the second half of the year. Financing and distribution will once again be handled by Next Entertainment World.
Any copying, republication or redistribution of KOFIC's content is prohibited without prior consent of KOFIC.
Related People Related Films Related Company Related News