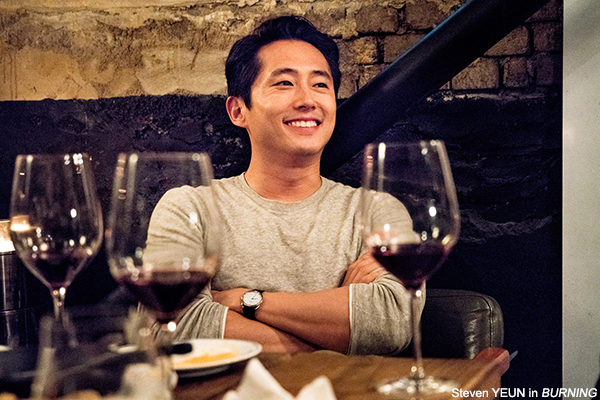 Steven YEUN has picked up more prizes for his role in LEE Chang-dong’s BURNING (2018), after winning the Best Supporting Actor Awards at the National Society of Film Critics Awards in the United States and the Florida Film Critics Awards. The accolades follow his wins in the same category at the Los Angeles Film Critics Awards and Toronto Film Critics Awards late last year.
BURNING, which is based on the short story ‘Barn Burning’ by MURAKAMI Haruki and co-stars YOO Ah-in of Veteran (2015) and newcomer JUN Jong-seo, premiered in competition at the Cannes Film Festival last May, where it earned the FIPRESCI Prize and the Vulcan Award for the Technical Artist.
In the film, YEUN plays Ben, a well-to-do young Korean man who meets JUN’s character while doing humanitarian work in Africa. They return to Korea where he becomes acquainted with her friend, played by YOO, whom he eventually shares his unusual hobby with.
BURNING has been performing strongly on the Awards circuit in North America, earning the Best Foreign Language Film Awards from the Los Angeles, Toronto and Austin Film Critics Awards. In addition, LEE’s critically acclaimed work became the first ever Korean film to make it to the shortlist for the Best Foreign Language Film category of the Academy Awards. It was the 30th time that an official Korean selection was presented for the category.
Any copying, republication or redistribution of KOFIC's content is prohibited without prior consent of KOFIC.
Related People Related Films Related News