Dec 10, 2018
Second Best Performance of the Year According to IndieWire 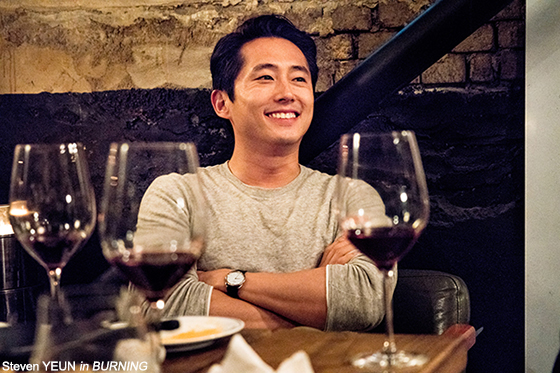 Actor Steven YEUN comes in second among the “16 Best Film Performances by Actors in 2018” as chosen by film website IndieWire. Published on December 5, the list compiled by critics at IndieWire designates the sixteen actors who demonstrated the most remarkable acting feats in the films released over the past year, regardless of the importance of their roles. Steven YEUN, who appeared this year in the comedy film Sorry to Bother You as well as in LEE Chang-dong’s thriller BURNING, caught the attention of the reviewers with his performance in the latter.
Michael NORDINE from IndieWire said of Steven YEUN’s acting in BURNING, “For all the terrifying moments we saw onscreen this year, nothing was more unsettling than a brief monologue in which Steven YEUN indirectly explains what ‘burning’ truly means in LEE Chang-dong’s masterful thriller. That revelation won’t be spoiled here, but suffice to say that there’s more to his strange hobby […] than it seems. YEUN, best known for his work on The Walking Dead, is hauntingly understated in a role that requires him to be nothing less than a slow-burning fuse threatening to engulf everyone around him at any moment. It’s on the strength of his performance, as well as those of YOO Ah-in and JUN Jong-seo, that BURNING lights up the screen so vibrantly.”
Steven YEUN is joined in the top 10, from third to tenth place, by Bradley COOPER of A Star is Born, Richard E. GRANT of Can You Ever Forgive Me?, Willem DAFOE of At Eternity’s Gate, Stephan JAMES of If Beale Street Could Talk, Josh HAMILTON of Eight Grade, Brady JANDREAU of The Rider, Daniel KALUUYA of Widows and Hugh GRANT of Paddington 2. Taking the first place is First Reformed lead actor Ethan HAWKE for his interpretation of a pastor going through religious divergences. IndieWire elaborated on this choice by stating that HAWKE is “such a reliable force in American cinema” and that the brilliance of his performance allows the audience to see the protagonist’s troubles in two diametrically different ways.
Meanwhile, BURNING itself is also receiving its share of recognition, the film being included to end-of-year film lists of several publications such as the New York Times and Les Cahiers du Cinéma. Manohla DARGIS, film critic at The New York Times, named the film as the second on her list of 2018’s best movies, applauding a “breath-catchingly lovely, terrifying movie”. BURNING, which was in competition at this year’s Cannes Film Festival where it received much praise, was released in North America on December 2.
Any copying, republication or redistribution of KOFIC's content is prohibited without prior consent of KOFIC.
Related People Related Films Related News