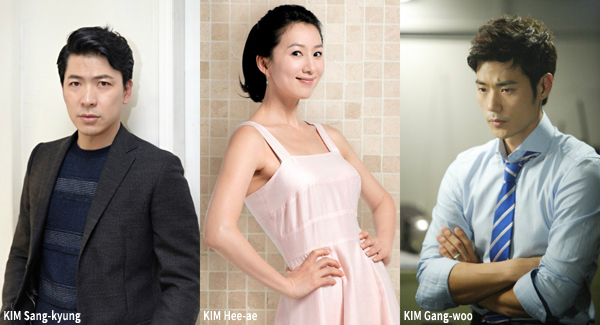 Actors KIM Sang-kyung, KIM Gang-woo and KIM Hee-ae are coming together for the upcoming thriller The Body, from new director LEE Chang-hee.
KIM Sang-kyung will play a detective who investigates a case involving a body, while KIM Kang-woo and KIM Hee-ae have signed on to play a couple.
Memories Of Murder (2003) star KIM Sang-kyung was last seen in The Deal in 2015 and has two soon-to-be released credits, The Discloser and Marital Harmony. KIM Gang-woo, known internationally for roles in The Taste of Money (2012) and The Treacherous (2015), will soon be on screens again in the action-thriller Overtime. More active on the small screen, KIM Hee-ae returned to cinemas after an 11-year hiatus in 2014’s drama Thread of Lies, following that with role in the period music biopic C’est Si Bon (2015).
The thriller will be the feature debut by director LEE Chang-hee, who worked in the directing department of the sci-fi hero film Haunters with GANG Dong-won and KO Soo in 2010. Since then, he also directed the short A Hideout in 2011.
Filming for The Body is expected to get underway before the end of June once casting is completed.
Any copying, republication or redistribution of KOFIC's content is prohibited without prior consent of KOFIC.
Related People Related Films