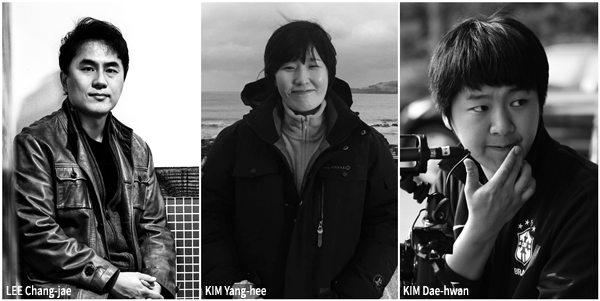 The Jeonju International Film Festival’s annual Jeonju Cinema Project has announced its 2017 participants. Unlike previous years, all three of next year’s directors hail from Korea. The 2017 JCP films will be made by LEE Chang-jae, KIM Yang-hee and KIM Dae-hwan.
Director LEE Chang-jae, known for his documentaries On The Road (2013) and The Hospice (2014) which screened at Jeonju, will make N Project, a documentary about a civil revolution that took place in 2002.
KIM Yang-hee will be making her feature directing debut with A Poet’s Love, having previously made shorts and worked as an assistant director on diverse works such as Mapado 2: Back To The Island (2007), The Sword With No Name (2009), Tokyo Taxi (2010), Love On-Air (2012) and Days of Wrath (2013).
KIM Dae-hwan, who debuted with the Dankook University feature project End of Winter in 2014, which was well received at the Busan International Film Festival and went on to screen at the Berlin International Film Festival, will helm First Trip. The film follows a couple who have been together for six years and experience various conflicts with their parents.
The Jeonju Cinema Project is now in its fourth year as a feature film project, and has yielded works such as Alive (2015) and The Avian Kind (2015). The projects will premiere at next year’s 18th Jeonju International Film Festival, which is set to take place from April 27th to May 6th.
Any copying, republication or redistribution of KOFIC's content is prohibited without prior consent of KOFIC.
Related People Related Films Related Company Related News