Nov 18, 2016
A DAY and HOUSE OF THE DISAPPEARED Unveiled in Santa Monica 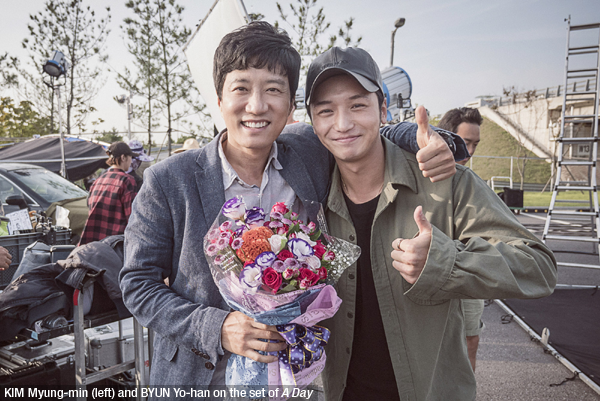 Korean sales representative revealed a pair of new acquisitions at this month’s American Film Market in Santa Monica, California. Both genre films, the new titles are A Day (working title) and House of the Disappeared.
Featuring KIM Myung-min, star of Deranged (2012) and the upcoming nuclear disaster film Pandora, A Day is mystery of a man who experiences the day he lost his daughter again and again, in an attempt to save her life. The film co-stars BYUN Yo-han of Socialphobia (2015) and JO Eun-hyung, who featured in PARK Chan-wook’s The Handmaiden, in a small role.
At the helm is first time director CHO Sun-ho, previously worked as an assistant director on Killer Toon (2013) and other films. The film is now in post-production and due out next year.
House of the Disappeared, another mystery film, features KIM Yun-jin, star of hit US show Lost and 2014’s local smash Ode to My Father. Co-starring is OK Taec-yeon, well known as a member of K-pop boyband 2PM. KIM plays a woman who, after 25 years in prison, returns to the home where her husband died and her son disappeared.
LIM Dae-woong, who helmed the horror To Sir, With Love (2006) and one of the segments of Horror Stories (2012), directs from a script by The Priests (2015) filmmaker JANG Jae-hyun. The film is currently filming and eyeing a 2017 release.
Any copying, republication or redistribution of KOFIC's content is prohibited without prior consent of KOFIC.
Related People Related Films Related News