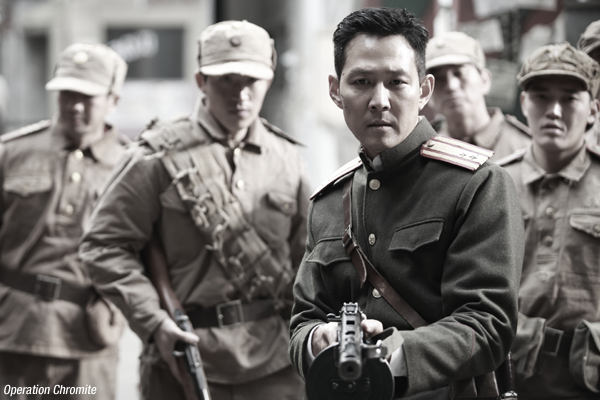 Summer Korean War hit Operation Chromite was screened at several US military bases around the world on September 16th. The film was already a hit in Korea, where it topped 7 million admissions (USD 48.94 million) after its release on July 27th.
The film has also encountered success in the United States, where it was released on August 12th in 13 territories and has accumulated USD 1.02 million in receipts to date. Prior to its release there the Army and Air Force Exchange Service (AAFES) put on 11 well-received preview screenings at US army bases, which prompted the global push. The film will screen at 71 military-operated cinemas, 33 of which are in the United States, while the remaining are spread out across the United Kingdom, Germany, the Netherlands and Japan.
Directed by John H. LEE, previously responsible for A Moment To Remember (2004) and 71-Into The Fire (2010), Operation Chromite follows the exploits of a small troupe of South Korean soldiers who go undercover as North Korean soldiers during the war to clear the way for a daring landing operation, spearheaded by General Douglas MacArthur. In addition to local stars LEE Jung-jae of Assassination (2015) and LEE Beom-su of The Divine Move (2014), the film features global name Liam Neeson as General MacArthur.
Any copying, republication or redistribution of KOFIC's content is prohibited without prior consent of KOFIC.
Related People Related Films