MY SISTER, THE PIG LADY Picks Up Grand Prix in Osaka

Mar 16, 2016
Korean Indie Comes Out on Top at Asian Film Fest in Japan 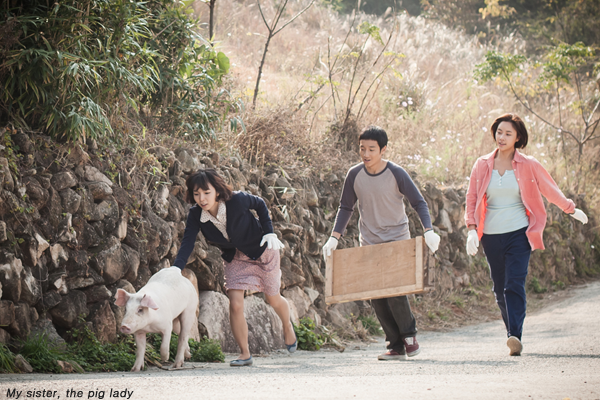 The 11th Osaka Asian Film Festival has awarded its Grand Prix to JANG Moon-il’s indie drama My sister, the pig lady, during its closing ceremony on Sunday, March 13th.
My sister, the pig lady had its world premiere as an out of competition screening at the Montreal World Film Festival before going on limited release in Korea last September. Jury president YEE Chih-yen singled out the film for “successfully balancing the commercial and the artistic fields of filmmaking.”

Taking place in a small coastal village, the film deals with young single women who try to woo the last remaining eligible bachelor in town, as all the men have left for the city. One of these women is Jae-hwa, who raises pigs in order to support her family.

Director JANG previously made The Happy Funeral Director (2000) and A Day For An Affair (2007). Upon receiving his prize, he said “Life is full of obstacles but if you persist you can succeed in the end. I think I am proving this is true by receiving this award tonight.” The film stars Death Bell 2 : Bloody Camp (2010) actress HWANG Jung-eum. In recent years, she has gained more popularity in TV dramas such as She Was Pretty (2015), Kill Me, Heal Me (2015) and Golden Time (2012).
Other award winners at the Osaka Asian Film Festival, which took place over March 4th to 11th, included the Most Promising Talent Award for Don't Look at Me That Way director Uisenma BORCHU, the Japan Cuts Award for Somewhere in My Memory by KANYAMA Keihiro, Ella CHEN’s Yakushi Pearl Award for her performance in The Missing Piece, and the Audience Award went to Opening Film Wansei Comes Home.
Any copying, republication or redistribution of KOFIC's content is prohibited without prior consent of KOFIC.
Related People Related Films