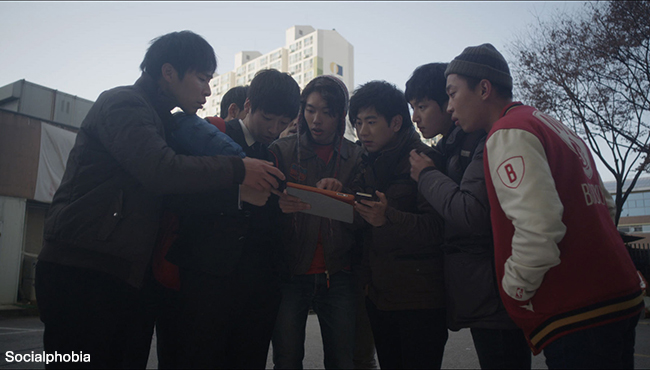 The Toronto Korean Film Festival is gearing up for its 2015 edition, which will kick off with the North American premiere of HONG Seok-jae’s Socialphobia, a feature project from the Korean Academy of Film Arts. The six-day event, which starts on May 26th, will present nine feature films and ten shorts.
Following opening night, SHIN Sang-ok’s Evergreen Tree (1961) will screen as a Korean Classic Presentation. Day three and five will feature the Korean diaspora programme, which includes the short animations A Purpleman (2010) by RYU Jin-ho and KIM Yoo-ri’s Birdfather (2013), as well as the feature-length animation Approved for Adoption (2012) by JUNG Henin and the documentary One for All, All for One by PARK Sa-yu, PARK Don-sa.
Other Feature Presentations will include LEE Su-jin’s Han Gong-ju (2013), JANG Kun-jae’s A Midsummer’s Fantasia and Kim Jung-keun’s The Island of Shadows. Beyond that, a Korean-Canadian Showcase will feature Albert SHIN’s In Her Place and the shorts Ksana and Leftover. The festival will also stage a Korean Shorts Competition Showcase, which will be comprised of NA Young-kil’s award-winning Hosanna, Ordinary Family, An Atrocity, Understanding Movies, The Way Back and Intruder.
Finally, IM Kwon-taek’s 102nd film Revivre will close the event on May 31st.
Any copying, republication or redistribution of KOFIC's content is prohibited without prior consent of KOFIC.
Related People Related Films