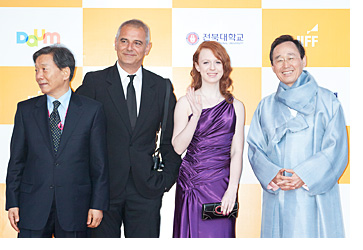 The 14th edition of the Jeonju International Film Festival kicked off in grand style on Thursday evening at in the Moak Hall of the Sori Art Center of JeollaBuk-do. Pouring rain from earlier in the day cleared out just in time to welcome the evening's many stars to the red carpet. The event hall's three tiers of seating were packed to the gills while reporters filled out the isles, washing the hall in a sea of flashlights as the celebrities made their entrance, who were welcomed with thunderous applause. 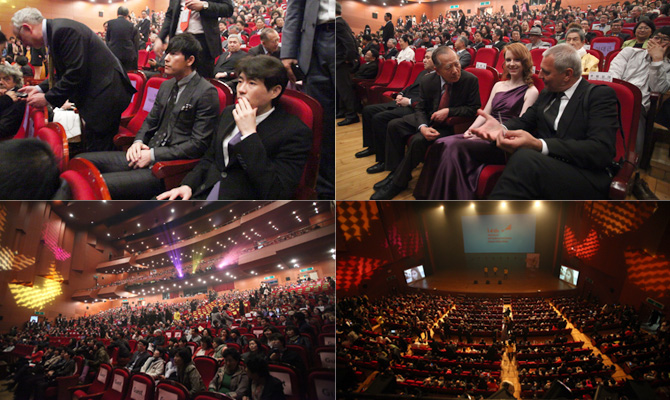 Among the many notable figures that walked the red carpet were jury members such as JUNG Woo-sung, RYOO Seung-wan (fresh from his visit the Udine Far East Film Festival with his spy thriller The Berlin File), SHIN Yeon-shick, KIM Kkobbi and novelist KIM Young-ha from Korea, as well as Khazak filmmaker Darezhan OMIRBAYEV, Cornell University professor Don FREDERICKSEN, Indian director Santosh SIVAN, French professor Giusy PISANO. Many directors with works featured during this year's festival also appeared, including LEE Sang-woo (Short! Short! Short!) and LEE Hyun-jung (Echo of Dragon) and Laurent CANET, who helmed the opening film Foxfire. In addition, veteran stars AHN Sung-ki and directors IM Kwon-taek were on hand at the start of the opening reception that took place later on in the evening.
A violinist opened the proceedings before the MCs KANG Ye-won and JEON Hyun-moo kicked off the show. A brief k-pop performance was also included to the delight of fans. The 14th JIFF began on April 25th and will screen its impressive lineup of films until it winds to a close on May 3rd.
Any copying, republication or redistribution of KOFIC's content is prohibited without prior consent of KOFIC.
Related People Related Films Related Company