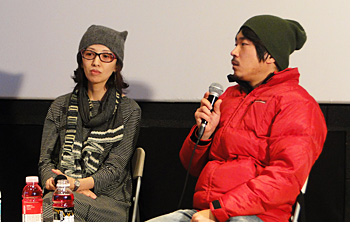 YANG Yong-hi, the second generation of a North Korean family in Japan, and who previously directed documentaries Dear Pyongyang and Goodbye, Pyongyang, came to Korea and attended a Q&A for Our Homeland. The film, starring the director and actor of Breathless, YANG Ik-june, is based on the actual events that happened in her life.
The director YANG said, “I couldn’t meet my family in North Korea because I was banned from the country after Dear Pyongyang was released. I have been trying hard to make trouble so I can become popular and protect my family. It might not be satisfactory because it’s my first dramatic film, but I hope you enjoy it.”
She also gave an explanation about the film saying, “I made it a dramatic film because I wanted to show you my family who I cannot actually shoot with a camera. Even though I added some dramatic elements, most of the events in the film happened in reality.” Then YANG Ik-june said, “It would be great if this film could screen at the congress. I hope that all the power holders like the National Assembly members as well as former and current presidents will watch it.” Our Homeland will be released in Korea on March 7th.
Any copying, republication or redistribution of KOFIC's content is prohibited without prior consent of KOFIC.
Related People Related Films