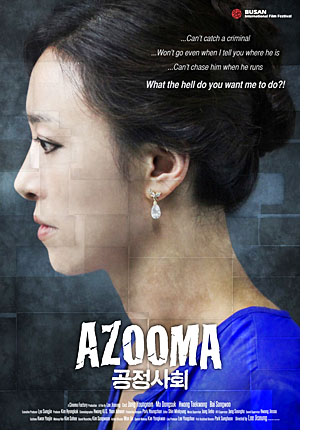 LEE Ji-seung’s Azooma, which deals with one of the biggest social issues facing Korea today, child molestation, has received the Best Feature Film Award during the Costa Rica International Film Festival held from November 9-13. Azooma is about a mother’s revenge in light of the weak police investigation and her husband’s obstruction towards the rapist that raped her 10-year-old daughter, starring JANG Young-nam and MA Dong-seok.
After being screened at the Busan International Film Festival, JANG Young-nam received the Best Actress award bestowed by the Director’s Guild of Korea and for the first time for a Korean feature film, it received the Platinum Award at the Nevada Film Festival.
This film has received reviews detailing how it has dealt with the provocative issue of child molestation, governmental power and the revenge of a weak woman following her abandonement by her husband with an unique editing style that brings out the catharsis within.
Director LEE Ji-seung, a former producer of KWAK Kyung-taek and KWON Sang-woo’s Pain, Azooma is his first feature film. It’s planned to be released in Korea in early 2013.
Any copying, republication or redistribution of KOFIC's content is prohibited without prior consent of KOFIC.
Related People Related Films Related Company