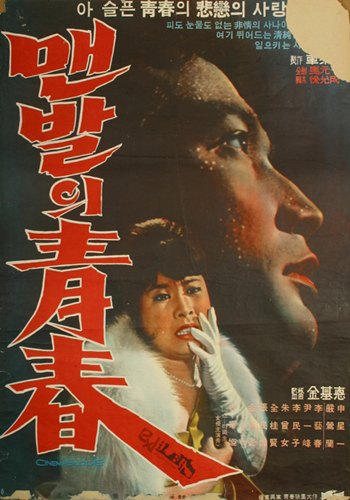 The 16th Busan International Film Festival (BIFF) is set to hold a retrospective of the 1960s hit director KIM Kee-duk. The retrospective, titled “Kim Kee-duk, On the Front Line of Korean Genre Films” will screen eight of the master’s films, allowing audiences to sample some of the most popular hits of the time.

Not to be confused with the maverick auteur director Kim Ki-duk (Arirang) of our current times, Kim Kee-duk was known as a hit-maker in the 1960s. From his 1961 debut with Five Marines to his last film Yeonggwangui 9 Hoimal in 1977, Kim made 66 films that transcended subjects and genres. With his classic 1964 film The Barefooted Young, he gained a reputation for having a keen sensibility for connecting icons like Shin Sung-il and Eom Aeng-ran to the spirit of the times.

■ Five Marines (1961)
KIM Kee-duk’s debut film – a war film removed from a simplistic anti-Communist plot that focuses on the human entity on the battlefield.

■ The Barefooted Young (1964)
The representative “Youth Film” – portrays a tragic love story of the gangster Doo-su and the diplomat’s daughter Joanna.

■ The North and South (1965)
A war melodrama that portrays one woman’s tragic relationship with two men, one from the South and one from the North.

■ Buy My Fist (1966)
A sports film about a boxing champion who quits the ring because of the guilt he feels about the death of an opponent during a match. The film gained significant attention after famous boxing champion Kim Ki-soo was cast in the lead.

■ Horse-year Bride (1966)
An exceptional sex comedy about the social prejudice against females born in the Year of the Horse in that era.

■ I Will Be a King for the Day (1966)
The first Korean film to record the actors voices during production. The film tells a story about jaebol (Korean-style family-oriented business conglomerate) Wang Bal-san’s family.

■ Until That Day (1969)
An unconventional, complicated melodrama, the film exposes the womanly desires of a widow who works as a dorm supervisor.
Sept 16, 2011
Any copying, republication or redistribution of KOFIC's content is prohibited without prior consent of KOFIC.
Related People Related Films