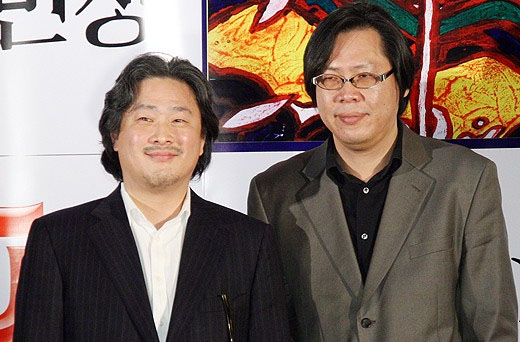 Brother-directors Park Chan-wook and Park Chan-kyong - or the ‘Parking Chance’ collaboration – posed with their Golden Bear Award of the International Short Film Jury for their film “Night Fishing” during the awards ceremony of the Berlin International Film Festival, February 19, 2011. In addition the Silver Bear in the Shorts section also went to a Korean film, “Broken Night” from emerging film director Yang Hyo-Joo.
“Night Fishing” is a fantasy film about a middle-age man (OH Gwang-rok), who accidentally pulls in a female shaman (LEE Jung-hyun) while fishing at night. The 30-minute piece was shot entirely with an iPhone4. “Night Fishing” is the Park brothers’ first co-production. While Chan-kyong developed the story and concept, Chan-wook focused on its cinematic adaptation. The other short film winner – “Broken Night” – is a portrait of the isolated lives of young people. The critics felt the greatest quality of the film was that it allowed the audience to indirectly and completely absorb the basic principles of Korean short film.
Director PARK Chan-kyong and the two main cast members LEE Jung-hyun, OH Gwang-rok had a Q&A session followed by the official screening. It is internationally sold by Finecut.
A total of 10 Korean films were invited to the 61st Berlinale, which is the greatest number of Korean films ever shown at the festival with two short films winning First and Second prizes in the Shorts section.
The Awards of the 61st Berlinale
Competition Awards