Korean Cultural Center New York Starts the Exhibition from Sept. 8, Virtual Gallery Will Be Open, Too

KOREAN ACTORS 200, which has been hosted by Korean Film Council (KOFIC, Chairperson Kim Youngjin) as part of a promotion campaign for Korean film stars since March, will be opened in the form of a photo exhibition in New York. KOFIC conducted the campaign to create a public archive to introduce Korean actors. The full-range project selected 200 actors representing today and tomorrow of Korean films, introducing them in writing, photography, and videos. Each week, the project had released 20 actors participating in the campaign through the special website (theactorispresent.kr) since March and has recently completed announcing 200 actors and opened its official Instagram account (@koreanactors200_official). Also, a book containing photos and filmography of 200 Korean actors was published in September and will be distributed to film officials around the world.

The photo exhibition is the finale of the campaign that has been held for the past few months. The exhibition, which features the faces of Korean actors captured by two representative photographers in Korea, will be held at Gallery Korea at Korean Cultural Center New York from September 8 to October 6, 2021. The photographers who participated in the project are Kim Jungman and Ahn Sungjin. Photographer Kim Jungman has been an international photographer for more than 40 years since winning the Young Artist Award at the 1977 ARLES International Photo Festival in France. Photographer Ahn Sungjin has shot the most pictorials of Korean celebrities over the past 30 years. The faces of the Korean actors the photographers captured are regarded as a movie itself. The exhibition will be produced and released as 'Virtual Gallery' content so that everybody can enjoy it at home vividly. 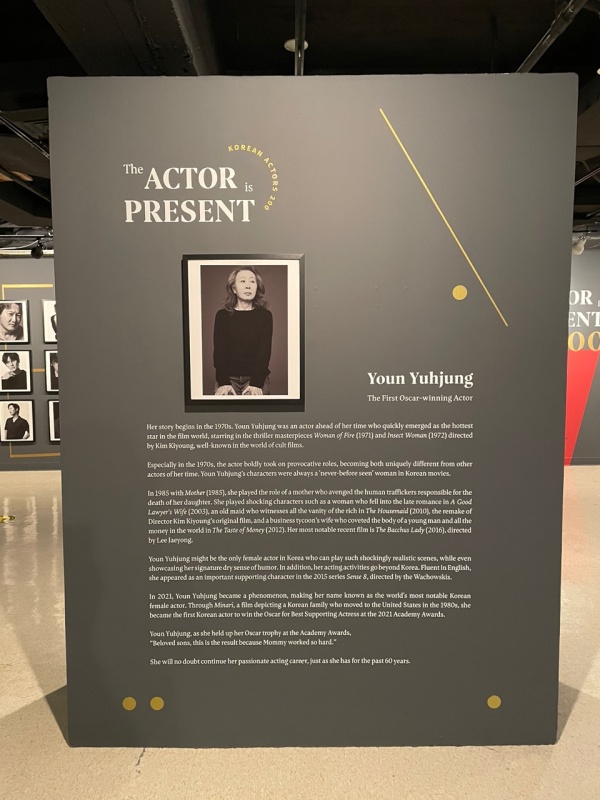 The exhibition in New York will be held through online pre-booking to limit the number of visitors per hour and thoroughly observe safety measures such as wearing masks and checking body temperature. Jo Yunjeung, Director of the Korean Cultural Center NY, explained about the exhibition, "It is a place where we can confirm the infinite energy of Korean cinema that will move the new 100 years."

Regarding the exhibitions, Kim Youngjin, Chairperson of KOFIC, expressed, "As the title implies, 'THE ACTOR IS PRESENT' is a bold declaration that says 'The Actor is Present' who will impress the world. I hope these exhibitions will strengthen the status of global Korean actors and serve as a stepping stone for actors who have been exposed to the global film industry less frequently to raise the degree of recognition and advance to overseas stages."