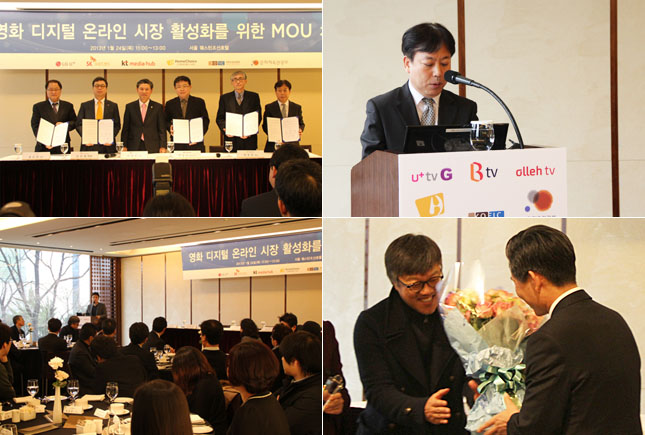 The Korean Film Council signed an MOU for the promotion of the digital online movie market with KT Media Hub, SK Broadband Media, LG U+ Media Log and Home Choice at 11 am on January 24th. “The four companies representing the online market will make their statistics public first” said an official of the Ministry of Culture, Tourism and Sports. “We will expand the number of participants in the market. We will support the creation of an integrated online computer network for the online movie market as well.”
The Korean film industry has formed an unbalanced market structure toward theaters since the fall of the home video market. But of late, the post-theatrical film market is growing fast around the digital online market, in particular, IPTV and digital cable TV. In addition, smart technology-based movie distribution is expected to play a key role in stabilizing the profit-generation structure and completing a virtuous circle for the film industry. 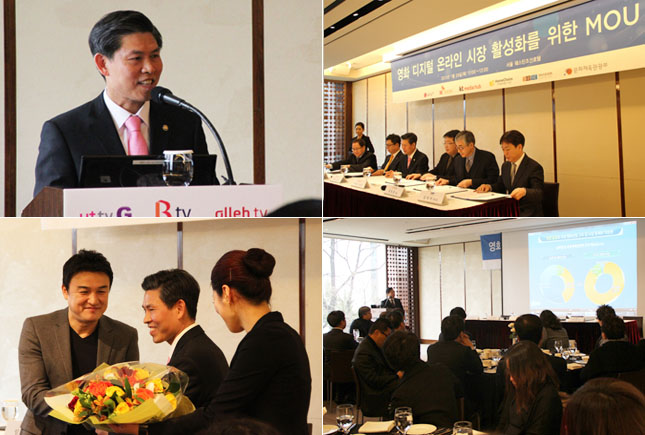 Therefore, the Korean movie world has emphasized the importance of securing transparency and establishing standards on the digital distribution of Korean films as a precondition for the promotion of the digital online movie market. The completion of an integrated film computer network, a long-cherished project of the film industry became closer as IPTV operators and digital cable TV operators, two key players in the digital online market, a future growth engine for the film industry, decided to supply their data on movies and link their computer networks to an integrated online movie computer network.
The participants made public their data on the 2012 digital online movie market and statistics of IPTV and digital TV and the movie rankings of IPTV and digital TV in 2012 for the first time at the event. Moreover, they held the 2012 IPTV and Digital TV Movie Awards. KWAK Young-jin, vice minister of Culture, Tourism and Sports gave a plaque of appreciation from the minister to actor PARK Joong-hoon, a co-chairman of the Good Downloader Campaign, in recognition of his efforts to raise consumers’ awareness to the value of movie copyrights. “We will support the digital online market so that the market can grow into a one trillion won (USD 830 million) market by 2017” said KWAK.
The Korean Film Council has been operating a task force team for the promotion of a secondary film market since 2012 to promote the post-theatrical film market. Moreover, they steadily made a lot of efforts to build an integrated computer network among online theaters such as holding the Forum to Promote the Digital Online Market in the Smart Media Era and running the Committee to Build an Integrated Computer Network among Online Theaters and developing the Statistical System to Collect and Analyze Statistics from IPTV and Digital Cable TV. This MOU will be the catalyst that starts the rapid growth of the digital online market of the Korean film industry in the future and lay the foundation for building a virtuous circle structure in the film industry.
Any copying, republication or redistribution of KOFIC's content is prohibited without prior consent of KOFIC.
Related People Related Company