MIRACLE IN CELL NO.7 vs. EXTREME JOB by HWANG Hee-yun /  Feb 12, 2019
The Race for 10 Million Admission Threshold Between Major Korean Comedies 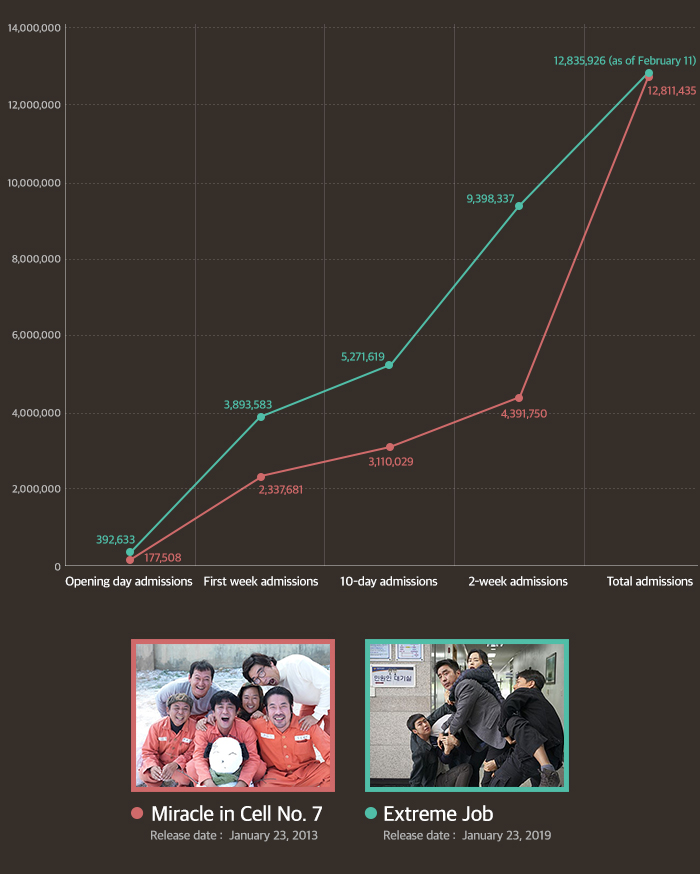 There are films that perform worse than expected, and then there are films that defy all expectations and become great successes. Extreme Job indisputably belongs to the latter category. The reason few in the film industry would have bet on this film was in large part due to the characteristics of the genre. For such comedy film with a relatively small budget, selling 2 million tickets would have been enough to cover its production costs. However, Extreme Job, which was released in the 2019’s Lunar New Year season, has already welcomed 12,835,926 spectators as it enters its third week and shows no sign of slowing down. It has reached with ease the 12 million admissions mark, exceeding six times the amount needed to break even.
In many ways, Extreme Job reminds another title released in the Lunar New Year season, this one in 2013, Miracle in Cell No.7. The two comedy films are similar in that nobody anticipated much from them yet they reached 12 million admissions, owing to the positive word of mouth from viewers. Of course, there are also some differences. One important point is that while Extreme Job elicits laughs from the audience, Miracle in Cell No.7 (2013) draws tears. In the box-office race, Extreme Job is far ahead. Miracle in Cell No.7 (2013) reached 5 million entries after 18 days of release and hit the 10 million mark after a month, while Extreme Job hit these same milestones in 10 and 15 days, respectively. Now boasting a 12,835,926 million haul, Extreme Job has already become the most commercially successful Korean comedy of all time.
Any copying, republication or redistribution of KOFIC's content is prohibited without prior consent of KOFIC.
Related Films Related News