Aug 18, 2020
The Box Office Success of PENINSULA and the Influence of Korean Series 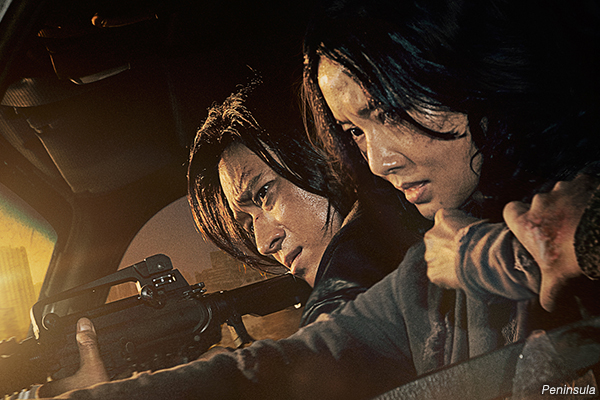 Peninsula, which is set four years after the events of TRAIN TO BUSAN (2016), is breathing new life into the movie theater industry across Asia. Korean distributor Next Entertainment World (hereinafter referred to as NEW) announced on August 4 that the combined box office of Peninsula in the eight Asian markets where it released, which includes Korea, were in excess of USD 48 million. As American entertainment news outlet Variety best summarized in the title “Zombie Action Film Leads Box Office as Asian Audiences Return to Cinemas”, the theatrical release of Peninsula was the concern of not only Korea but also the whole movie theater sector in Asia. With the success of Peninsula, we look back on the potential of Korean entertainment in Asia and especially K-dramas.
Filling the spot left vacant by Hollywood movies 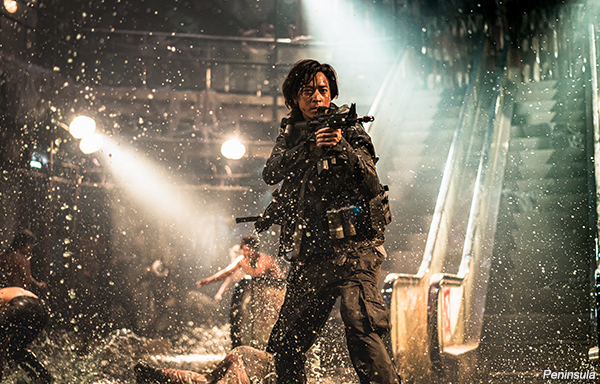 NEW explained that Peninsula has earned a cumulative haul of USD 10 million over three weeks of release in Taiwan, making it the top box office earner this year in the island nation. This is more than double the total of Bad Boys for Life (USD 4.5 million) starring Will SMITH, which was released earlier this year in February, and also exceeds the lifetime score of TRAIN TO BUSAN (2016), director YEON Sang-ho’s previous film. Contacted by Variety, Wayne CHANG, CEO of the film’s local distributor Movie Cloud, summed up the box office results in one word: “crazy”. Indeed, the figures for Peninsula are a surprising box office achievement, considering that the social distancing measures currently in place in Taiwan are reducing theaters’ capacity. In Singapore, Clover Film, which has been responsible for bringing NEW titles such as The Beauty Inside (2015) and TRAIN TO BUSAN (2016), set with Peninsula the biggest opening day for a Korean film, and in Vietnam, the film beat BONG Joon-ho’s PARASITE (2019) box office record to become the biggest Korean film, with a total haul in excess of USD 3.3 million. In addition, in Laos, the title opened in first place on July 29.
The Asian box office success of Peninsula is no accident – it was actually somewhat expected. Anticipation for the sequel was high, its predecessor TRAIN TO BUSAN (2016) having already set new all-time box office records for a Korean film in major Asian markets four years ago. Moreover, as most of the Hollywood franchise films had their theatrical releases delayed or were pulled from this year’s release calendar altogether due to the pandemic caused by the novel corona virus, the film exhibition sector in Asia has long suffered from a “famine of attention-grabbing releases”. In the case of Taiwan’s cinemas, which have been successful in handling the COVID-19 epidemic, the government has never officially closed the theaters. Yet, they were still struggling to keep business going since there was no movie well-suited to draw crowds, as Hollywood movies were being taken off from the studio’s schedules one after the other. The solution they found was to rerelease previous major films, or to screen independent films and Asian movies, but this never became a bona fide alternative. Peninsula, on the other hand, was different. It was appraised as a good fit for the role of substitute owing to its many similarities with Hollywood blockbusters, such as its belonging to a franchise along with TRAIN TO BUSAN (2016), its qualities as an action film centered on car chases, or even its post-apocalyptic outlook on the world.
Of course, it couldn’t be said that the pandemic was of much help to the box office. Since most Asian cinemas are strictly observing social distancing measures, including Singapore where only up to 50 spectators are allowed per auditorium, the scale of the overall box office is obviously limited, and in the case of Hong Kong, where TRAIN TO BUSAN (2016) holds the title of “top-grossing Asian film ever in history”, it couldn’t even hit theaters. Although it was originally slated for release on July 19, cinemas were ordered to shut down as Hong Kong faced a third wave of COVID-19 infections. NEW clarified that, with the exception of Hong Kong, there has been no changes in overseas release plans. After a simultaneous launch in Korea, Singapore and Taiwan on July 15, Peninsula has been released in Malaysia (July 16), in Thailand and Vietnam (July 23), in Mongolia (July 24), in Laos (July 29), in Denmark and Iceland (July 30), in Canada, Sweden, Norway and Finland (August 7). After opening in Indonesia, Cambodia, the Philippines, Argentina, Australia, New Zealand, Ukraine, the Netherlands and the Baltic countries last week, the movie will open in US theaters this week, on August 21.
Taking Advantage of the popularity of Korean series 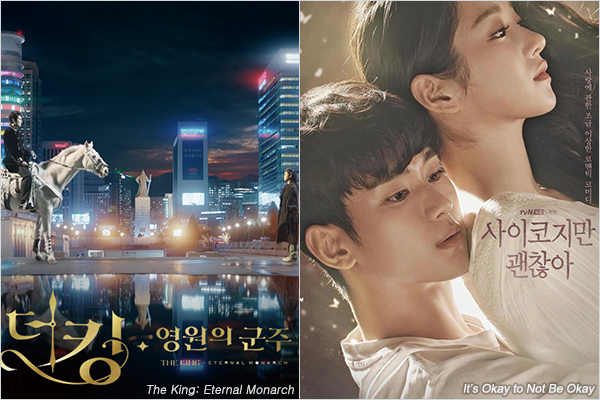 As explained above, the halo effect of the previous work TRAIN TO BUSAN (2016) and the analogy effect caused by the void of Hollywood franchises had an influence on the popularity of Peninsula in Asia, but a point can be made that the vitality of Korean entertainment, which are very popular across Asia, also played a role in this – and more particularly Korean series on Netflix. One look at Netflix’s TV series popularity charts for each country will tell you at a glance how strong Korean series have been in Asian countries.
According to Flix Patrol, a website that compiles worldwide charts of the most watched VOD movies and shows, The King: Eternal Monarch from local broadcaster SBS and starring Lee Min-ho and Kim Go-eun ranked 10th in the global ranking of TV series serviced by Netflix (as of August 8, 2020). Looking at the national charts, Korean series make up eight of the top 10 TV series in Thailand, while they took six in Taiwan, Malaysia and Singapore, five in Hong Kong, the Philippines and Vietnam, and four in Japan. The top Netflix TV series in these eight Asian countries were all Korean series, with The King: Eternal Monarch in particular taking the top spot in 5 countries, while Crash Landing on You, Hospital Playlist and It’s Okay to Not Be Okay, all from cable network tvN, ranked first in Japan, Taiwan, and Vietnam, respectively. The King: Eternal Monarch and It’s Okay to Not Be Okay secured a spot in the top 10 in eight territories, while Crash Landing on You and Mystic Pop-up Bar (from JTBC) featured in the top 10 in seven countries, and Hospital Playlist in six countries. In addition, Hi Bye, Mama! (tvN) is sitting among the 10 most watched shows in 3 countries, and Itaewon Class (JTBC) in 2 countries. These TV series are all new shows that first aired this year, including Crash Landing on You which began broadcasting in December 2019. Oddly enough, however, in Thailand, the 2016 series Goblin: The Lonely and Great God (tvN) and the 2018 show What’s Wrong with Secretary Kim? (tvN) ranked 3rd and 9th in the charts, respectively, and in Vietnam, the 2015 title Reply 1988 (tvN) took 4th place, while the 2009 show Boys Over Flowers (KBS2) ranked 10th. It is believed that this regain of interest in Boys Over Flowers was triggered by Lee Min-ho playing the titular character of The King: Eternal Monarch. 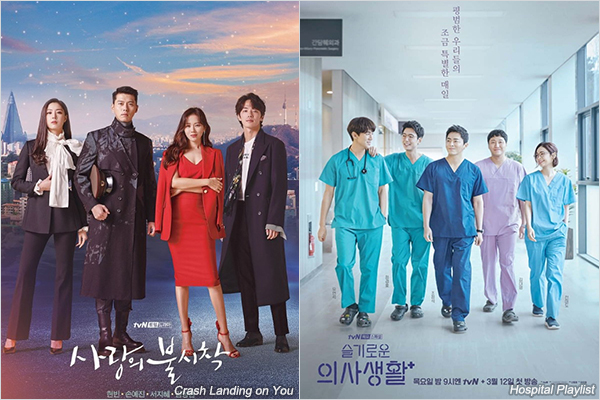 K-pop, K-dramas, and K-movies do not exist separately, but play complementary roles. If series or movies becoming the talk of the town because of the participation of a K-pop idol can be counted as a direct influence, the indirect influence of one cultural experience pervading another cultural experience cannot be ignored. For example, the fact that the Netflix original series Kingdom has attracted global attention as a “K-zombie series” cannot be completely divorced from the success of TRAIN TO BUSAN (2016). This is because those who first were exposed to TRAIN TO BUSAN (2016) are much more likely to want to learn more about Kingdom. On the other hand, the fact that Kingdom has garnered global attention with its “Netflix Original” label surely played a positive role in the international success of Peninsula.
In that respect, it is necessary to keep an eye on the mood of the Asian TV series market for the interest of Korean movies. With Korean series, it is possible to check in real time what subjects and stories Asian audiences are showing interest in.
Any copying, republication or redistribution of KOFIC's content is prohibited without prior consent of KOFIC.
Related People Related Films Related Company Related News